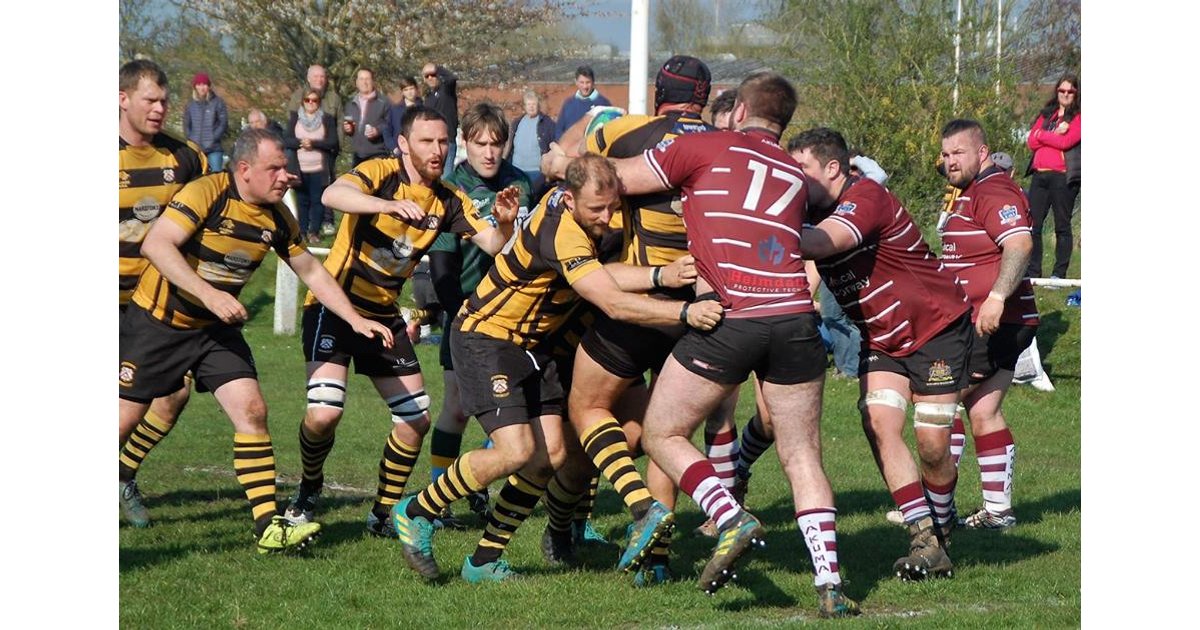 Stafford 1st XV say goodbye to the County Ground with nine tries to lift themselves out of the relegation zone.

Stafford welcomed Newcastle for the final 1st XV game at the County Ground prior to the move across to Blackberry Lane later in the year. Stafford were fighting hard to chase down their nearest rivals, Veseyans, who held a narrow three-point buffer between the county town team and relegation. With just two game remaining the season was spiralling into a tight finish.

With a sizeable home crowd urging them on, Stafford came roaring into the match with great energy, culminating in a Louis Dewsbury try to take the lead within the first five minutes. Newcastle hit back immediately through their heavy set of forwards to snatch an equalising try and tie the game. The home side resumed the assault with some brutal rugby, a heroic carry saw an injury for Stu Lewis which ended with the substitutes bench having to be used. Stafford stole the subsequent scrum and quick hands along with a deft sidestep opened space for Dean Fuggle to take Stafford’s second try. Newcastle were fighting hard but they weren’t allowed to breathe with the home constantly harassing the ball carriers contesting any possession. The attack was relentless and the third try came courtesy of a leaping Callum Jones whose acrobatic dive over the line left the defence standing. The visitors responded with some good phases of play until a prowling Gaz O’Connor ripped the ball, releasing a flying Louise Dewsbury to sprint over half the length of the pitch for the fourth try. In a slightly confusing period Stafford were temporarily reduced to fourteen courtesy of a yellow card, the referee then showed a red card to a member of the Newcastle coaching team ordering them off the pitch. The subsequent kick off saw the ball being driven back up the field until Dean Fuggle ghosted through the defence to gift Callum Jones the fifth try, converted by Dan Mills. Newcastle couldn’t find any respite in the restart with Dan Smith and Stephen Frost punching deep holes in the defence before a series of flowing passes led to Dan Mills crossing in the corner for the sixth try, closing the half. Stafford went into half time leading 32-5 and very much in control of the game.

Strong Newcastle play opened the second half and the visitors appeared to be through, but a final knock on bought the momentum to a shuddering halt. A strong defensive set saw Callum Jones coming off with a slight injury and the substitutes bench was busy shuffling positions on the pitch. A succession of penalties for the visitors allowed them to slowly grind out territory but they couldn’t find a way through a determined defence. Stafford blunted everything thrown at them, breaking out of their own half, ripping through the opposition and ending with Ben Chatfield crashing across the line only to be ruled as held up by the referee. The subsequent Newcastle kick couldn’t find touch and the ball found its way to James Wilkinson who ran over a couple of defenders before eventually being wrestled to ground deep in opposition territory. The visitors defended like demons but they couldn’t cope with a determined Gareth Ley who savagely tore through anything in front of him, dragging a final defender along to take Stafford’s seventh, converted by Dan Mills. The pace was relentless, the pressure being constantly ramped up, a couple of probing runs by Alosio Yamoyamo were repelled, but a third saw the Stafford player ricocheting off grasping hands to run the length of half the pitch to secure the eighth try of the match. The hard-working Newcastle forwards got some consolation through a converted try to add to the visiting tally. The visitors tried to build phases but with Christian Stelian, Rhys Williams and Sam Egerton spearheading a hungry hunting pack, any possession was under constant threat. Pouncing on a loose piece of play the ball found its way out to Tom Windibank, who set off from inside his own half, bounced the opposition winger into touch and sprinted the rest of the way to grab Stafford’s ninth and final try of the afternoon. A further Newcastle try saw the visitors looking for a bonus point but some strong defence from the fresh legs of Sam Chatfield and Tom Williams snuffed out any real opportunity. Two yellow cards reduced Stafford to a temporary thirteen closing off the final five minutes of an exhausting game.