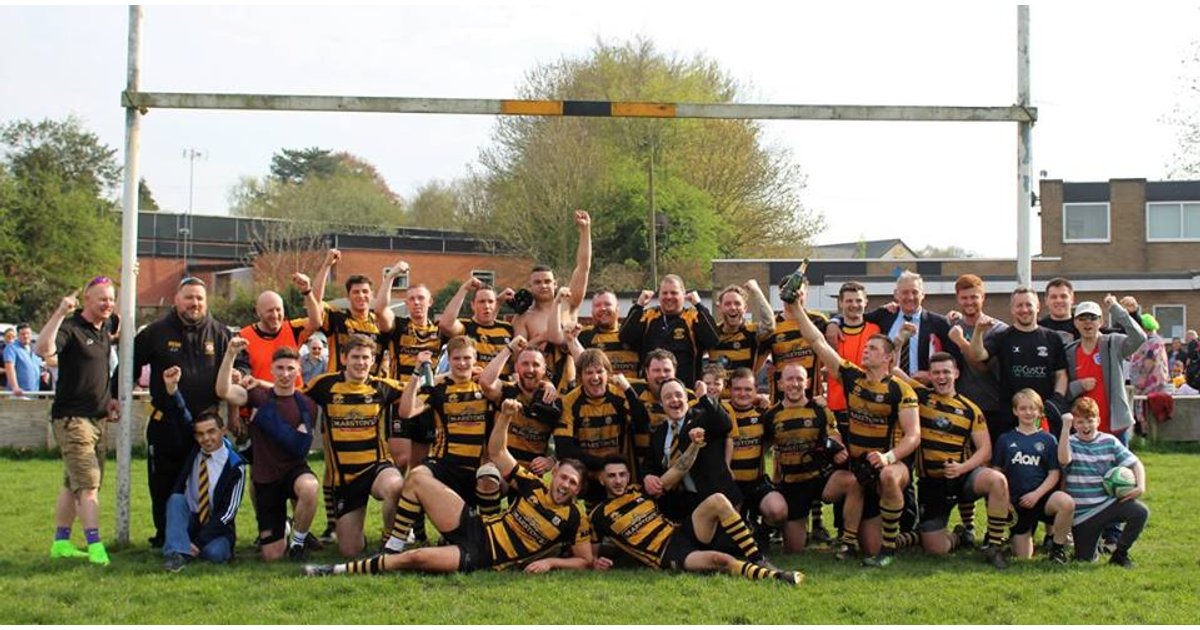 Its promotion back to Midlands 2 West (North) for the young Stafford 1st XV as eleven tries earns a deserved five points against a visiting Handsworth cementing the second-place league position.


Stafford welcomed Handsworth to the County Ground for the final league game of the season. With two touring junior sides paying a visit, a senior players reunion and April sunshine making a good running surface, Castle Fields had an electric excitement. Handsworth travelled on the back of some good performances but lacking consistency across the season.


The opening phases of the game saw the visitors rewarded with an early penalty to give them the lead and the first points of the afternoon. The Stafford response was immediate with a solid line out allowing Toran Spelman to burst through the defence for a try, Christian Stelian adding the conversion. The ensuing Handsworth restart didn’t go to plan, the subsequent scrum saw Tom Windibank hurtling down the field before Callum Hoy took over the pace for the second try of the afternoon, converted by Christian Stelian. Handsworth started to build some good phases of play but an injury temporarily halted proceedings, the restart ball squirted loose and a chasing Christian Stelian collected the ball for a try followed by the conversion. The visitors had to endure a relentless assault from all corners of the field as Stafford built attack from everywhere. A stolen line out ball left the secure hands of Callum Hoy, for Tom Windibank to chew up the hard yards and Louis Dewsbury scored a try to secure the bonus point. As the half started to wind down intelligent game management by Callum Hoy saw a quick penalty which left the visitors standing and Angus Lennon rumbled across the line for the final try of the half converted by Christian Stelian. Stafford went into half time leading 33 -3 and very much in control of their own destiny.


Stafford continued the attacking rugby from the start of the second half whistle but the momentum was bought to an abrupt halt when an injury to Will Hamplett stopped the game and led to the numbers being shuffled on the pitch. Handsworth took full advantage to crash the ball up the pitch through their heavy set of forwards to eventually earned an exhausting converted try. Stafford settled back into a dangerous rhythm and when the ball found its way to Louis Dewsbury he ghosted outrageously through a standing defence for his second try of the afternoon, converted by Christian Stelian. Tom Windibank, Ben Pryce and Callum Jones joined forces to terrorise the beleaguered defence allowing Louis Dewsbury to speed away for his hattrick. An injury to Matt Walklate saw more changes before Christian Stelian stretched his legs demonstrating all his pace for two successive tries. A Handsworth interception led to the visitors claiming their second try of the afternoon before Tom Windibank responded with a try of his own, converted by Christian Stelian. As players on both sides were visibly suffering from the pace of the game, the last points of the afternoon came through another tireless Christian Stelian run to secure Stafford’s eleventh try of the afternoon and finish a stellar afternoon of rugby.


NEXT 1ST XV GAME; Sunday 6th May 2018, at Leek RUFC for the Intermediate Cup final against Newcastle RUFC.


The following 42 players have been named on the 1st XV match card on one or more occasion for the 2018/19 promotion season and have all played their part in grinding out the points: