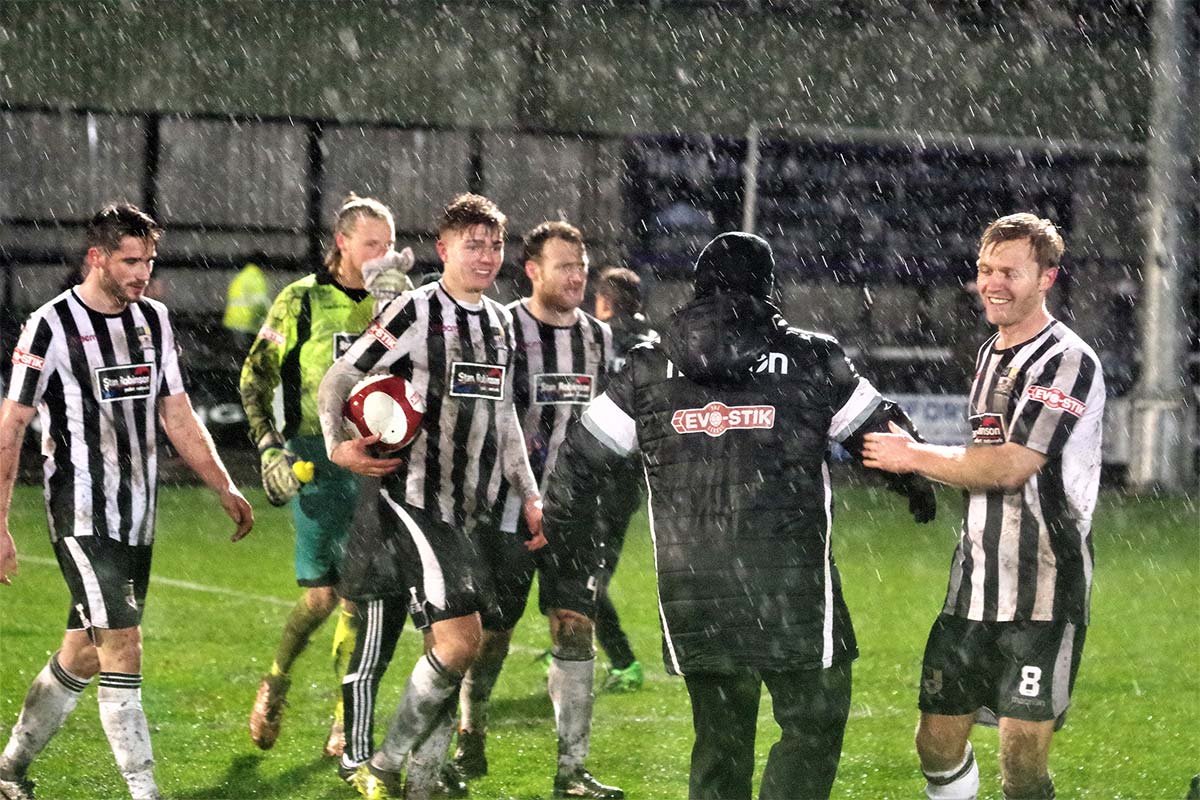 Stafford Rangers marked the return of The Shed with their first win in seven league games with by thumping local rivals Hednesford Town at a rain-soaked Marston Road. The Rangers fans didn’t need an excuse to occupy their newly erected stand for the entire 90 minutes but any who felt like venturing out from under cover would surely have been put off by the persistent heavy rain that fell throughout the game.
There was an explosive start to this eagerly awaited encounter with a goal for each side in the opening 6 minutes.

Rangers were first to strike on 3 mins when Jake Charles tapped home after Andy Haworth’s shot had been parried by Josef Bursik.
Joe Cuff missed a chance to extend the lead but Hednesford were soon back on level terms. A long clearance downfield from Bursik sent Michael Howard clear and he fired past George Sykes-Kenworthy in the Stafford goal.

Cuff then missed another chance for the home side when he hit the post before Andy Haworth sliced wide when well placed. A poor back pass from Charlie Gatter put Cuff in once more but the winger’s shot swung away. A minute later a flick from Theo Bailey-Jones put Cuff in behind the Hednesford defence but a poor first touch allowed Bursik to get to the ball first. Two more chances had gone begging.

Cuff finally got his goal just before half time but not before Hednesford thought they had taken the lead in what was one of the key talking points of the first half. Romario Martin’s long-range effort bounced awkwardly just in front of Sykes-Kenworthy who failed to gather cleanly.

The ball spilled loose and Dan Cockerline raced in. The Rangers keeper pounced on the ball but seemingly slid over the line. Neither referee nor his assistant were in a position to award the goal although Steve Burr said afterwards that the referee had stated Cockerline would have been penalised for a foul had the ball definitely crossed the line.

Having survived that let off, Rangers took advantage five minutes before half time when Tom Thorley found Cuff who cut inside Kieron Dawes and advanced to fire the home side back in front. Rangers had chances to add a couple more before the interval as Charles went just wide then when Luke Jones’ header was blocked on the line neither Charles nor Dan Burns was able to apply the finishing touch.

The second half didn’t produce anywhere near the same number of chances but those that came fell largely to Rangers and more importantly Charles converted two of them. He made it 3-1 in the 57th minute turning in Haworth’s corner at the near post then completed his hat trick 10 minutes later after Thorley was the supplier.

Charles went close to a fourth goal with a lob over Bursik that drifted just wide while Thorley’s 35 yarder went over.
Apart from a Jack Hallinan effort which just cleared the Stafford bar, Hednesford never really looked like reducing the deficit as Stafford completed a league double over their arch rivals.