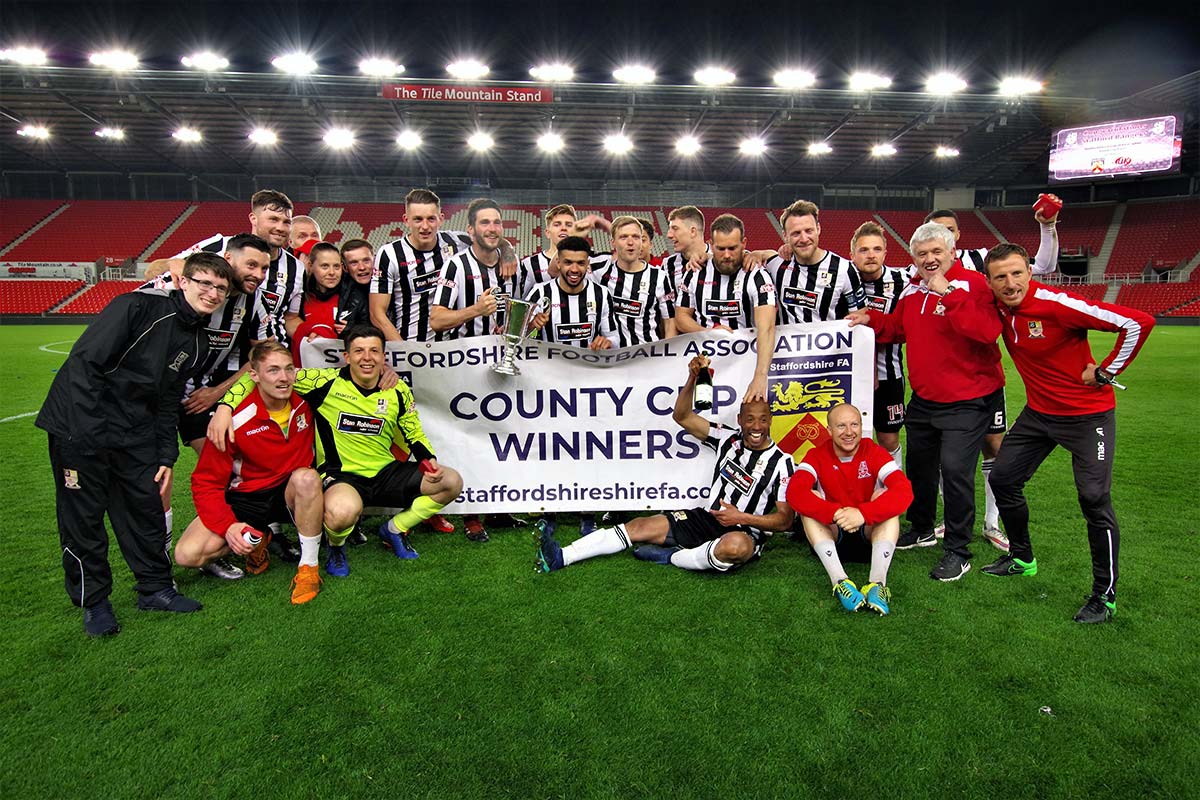 Stafford Rangers retained the Staffs Senior Cup with a comfortable victory over Rushall Olympic to strengthen their record as the competition’s most successful non-league club. After a cagey opening ten minutes that Rangers shaded, the cup holders took control of the first half proceedings and never looked like losing. Rangers had posed most of the threat without testing Ben Newey until an Andy Haworth cross was missed by the Rushall keeper forcing Lee Smith to concede a corner. Haworth took the flag kick and, after an exchange with Matt Hill, picked out Theo Bailey-Jones who fired wide of the target.

But the opening goal wasn’t long in coming and it came out of another Haworth corner on 17 minutes. Luke Jones rose high to head the ball back across goal and Dan Burns nodded in at the near post. Jack Sherratt – the only Stafford player who was in last season’s winning side – fired wide and Luke Jones headed over as Rangers looked to take a firm hold but when Hill got caught in possession, Sherratt had to ‘take one for the team’ and picked up a yellow card for a late challenge on Simeon Maye. Sherratt remained in the thick of the action, forcing a save from Newey after combining with Jake Charles.

It was Charles who made it 2-0 on 35 mins, sliding in to convert the rebound after Newey could only parry Tom Thorley’s initial strike. Haworth’s free kick was inches away from adding a third while Tyler Lyttle spurned Rushall’s best chance when he delayed his shot and Thorley nipped in to clear the danger. Rushall enjoyed a better start to the second half, keeping the ball better when in possession, but there was no end product when they pushed forward.

Instead, it was Stafford who looked most likely to add to their tally. Haworth fired low at Newey after holding off Lyttle’s challenge and it was little surprise when the lead was extended on 58 mins although there was a double element of good fortune behind it. First came as Joe Hull attempted to let an overhit ball from Burns run for a goal-kick. The Rushall defender misjudged the flight of the ball which struck him on the back and went out for a corner. Hill and Haworth combined once more with the latter sending in a cross from the left and Charles’ header deflected off Rushall captain Orrin Pendley and past a wrong-footed Newey. With the result in the bag, it was a display of exhibition football from Rangers who took advantage of an excellent playing surface to demonstrate their passing game to the delight of their fans – although they rarely looked like adding further to the tally. Haworth whipped in a free kick, which was comfortably taken by Newey, and late shot from Bailey-Jones was as close as they came while Rushall simply didn’t look like scoring and Rangers were able to celebrate their 13th competition success.