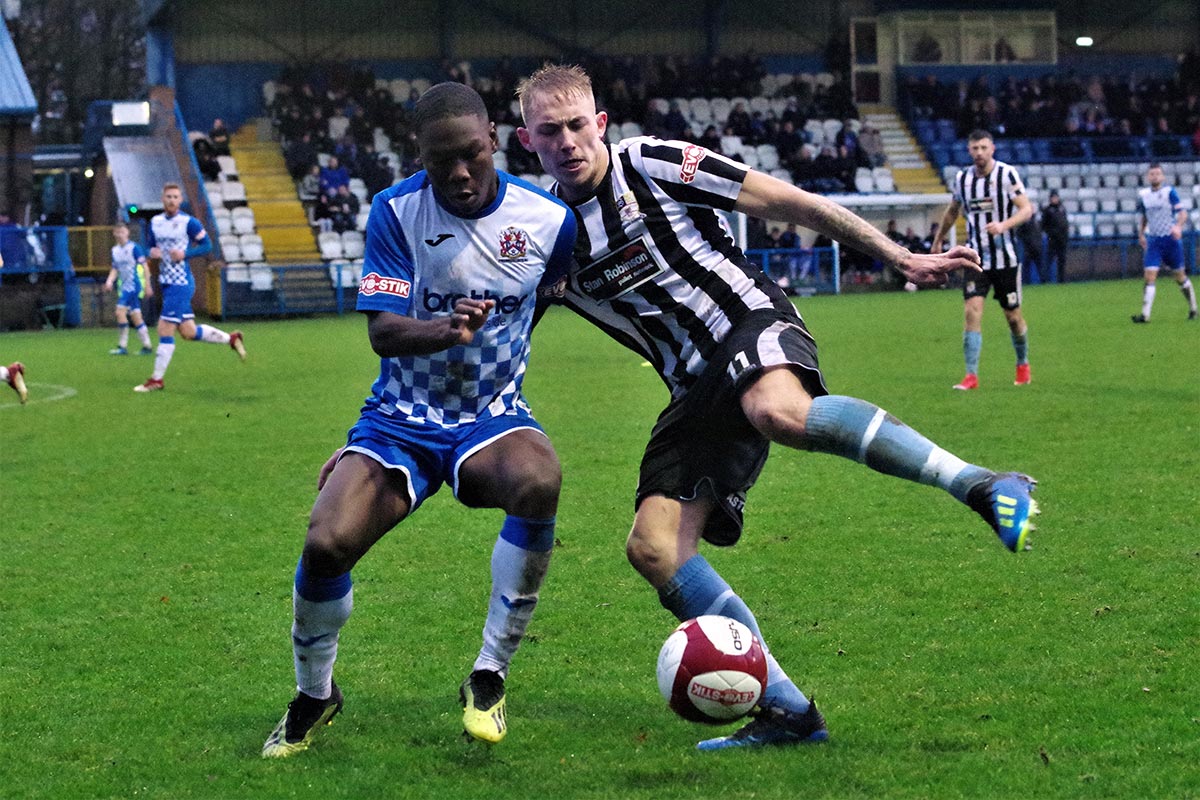 Stafford Rangers let slip a two-goal lead as they were held to a draw on a wet and windy afternoon at Stalybridge Celtic.
Manager Steve Burr made several changes to the starting line up with keeper Adam Whitehouse and full backs Lewis Banks and James Askey notable absentees.  Replacing Whitehouse was 19-year-old George Sykes-Kenworthy, signed on loan from Bradford City, while Sam Coulson and Josh Green filled the defensive slots. Stafford were positive from kick off and after a couple of half chances went begging they were rewarded in the 12th minute when Theo Bailey-Jones headed in Andy Haworth’s left-wing cross.

Rangers looked to build on their early advantage and Joe Cuff flashed a low centre across the face of the home goal then Jake Charles should have done better after being put through by Haworth. Andrai Jones advanced after pouncing on a loose ball in midfield but sent his shot rising over the Stalybridge goal before Charles was denied by the boot of Ross Dent from a Bailey-Jones cross.

Haworth’s 25 yarder also went over as Rangers continued to dominate and only a number of saves from Turner just before half time kept Stalybridge in the contest – the home keeper denying Bailey-Jones, Charles and Luke Jones in a five-minute spell. Rangers started the second half brightly and Tom Thorley extended the lead on 57 minutes when he headed in Bailey-Jones’ cross although it needed the referee’s assistant to confirm the ball had crossed the line as Turner attempted to save.

Five minutes later, Joe Cuff missed a great opportunity to wrap the game up when he failed to control in the area after a good approach involving Charles and Green. Stalybridge needed to do something to get back in the contest and Andy Scott took charge when he tried his luck from 30 yards – the ball floating just wide of the top corner.

The Celtic no10 was not to be denied and with 18 mins remaining he reduced the arrears with a free kick from a similar distance that went in via the underside of the bar. Chris Smalley headed wide a few minutes later and it looked as though Rangers would hold on for their first league win in seven outings.

Then, with the game in the third minute of added time, Stalybridge launched an attack down their right with a throw in. Sykes-Kenworthy came out to the edge of his area intending to clear but then hesitated, allowing Neil Kengni to float the ball over the out of position Stafford keeper and give Stalybridge an unlikely equaliser.