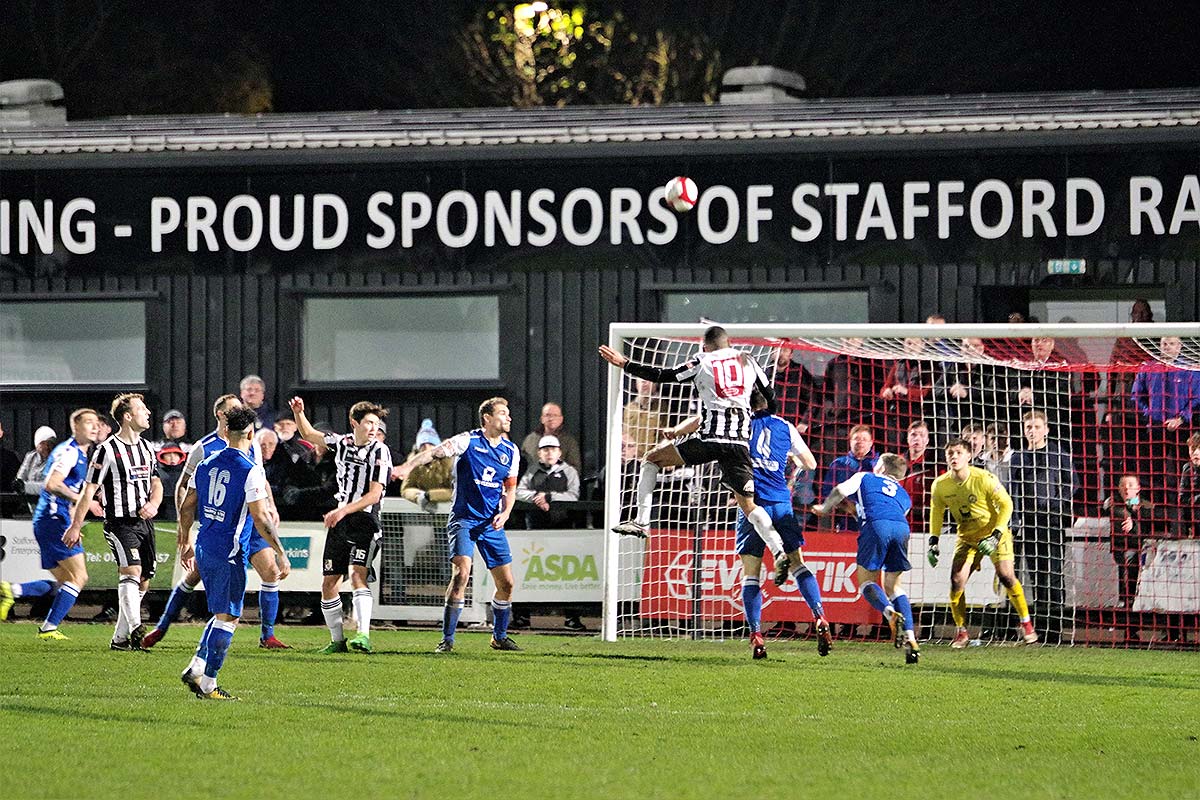 Luckless Stafford Rangers slipped to their fourth home defeat in six games as an early second half strike from Ash Young was enough to give visiting Buxton all three points. Rangers’ Adam Whitehouse was the first of the two keepers to see action when he kept out Liam Hardy with his feet in the second minute. The ball ran loose to Brad Grayson whose shot was blocked by Luke Jones. At the other end, a slip from his opposite number Theo Roberts almost let in Jake Charles but Roberts scrambled back to smother. Moments later, Roberts saved from Joe Cuff at his near post after a good move down the Rangers’ left.

Both sides battled keenly but it was midway through the half before either goal came under threat again and Greg Young should have done better with a free header that came his way – the visiting skipper steering the ball wide. A couple of minutes later, John Pritchard’s free kick struck the outside of Stafford’s left-hand post. On the half hour, Rangers got the ball in the Buxton net, but Jake Charles was ruled offside.

The half-finished with chances coming at both ends. Roberts saved again with his feet to deny Charles then Buxton hot shot Liam Hardy missed two good chances in quick succession, firstly going wide from the edge of the area following a counter then missing the target again after having got the better of Luke Jones. Just before the whistle sounded, Brad Grayson saw his volley parried away by Whitehouse.

Lewis Banks went close for Stafford in the first minute after the resumption, but it was Buxton who finally got the breakthrough on 49 mins when Young’s well struck 20 yarder beat Whitehouse via the inside of his right-hand post. Shortly after, the Boro keeper did well to keep out Hardy’s near post header when Callum Chippendale and Scott Sephton – involved in the approach to Buxton’s goal – combined again.

Stafford created plenty of opportunities to get back level but Izak Reid, Andrai Jones and Joe Cuff all missed out. The best of the chances probably fell to Reid but his attempted chip over Roberts landed tamely in the Buxton keeper’s arms. Roberts blocked Jones’ forceful shot while Cuff blazed high over on another frustrating afternoon for the Boro – not helped by persistent, yet unpunished, time wasting and theatrics from the visitors.