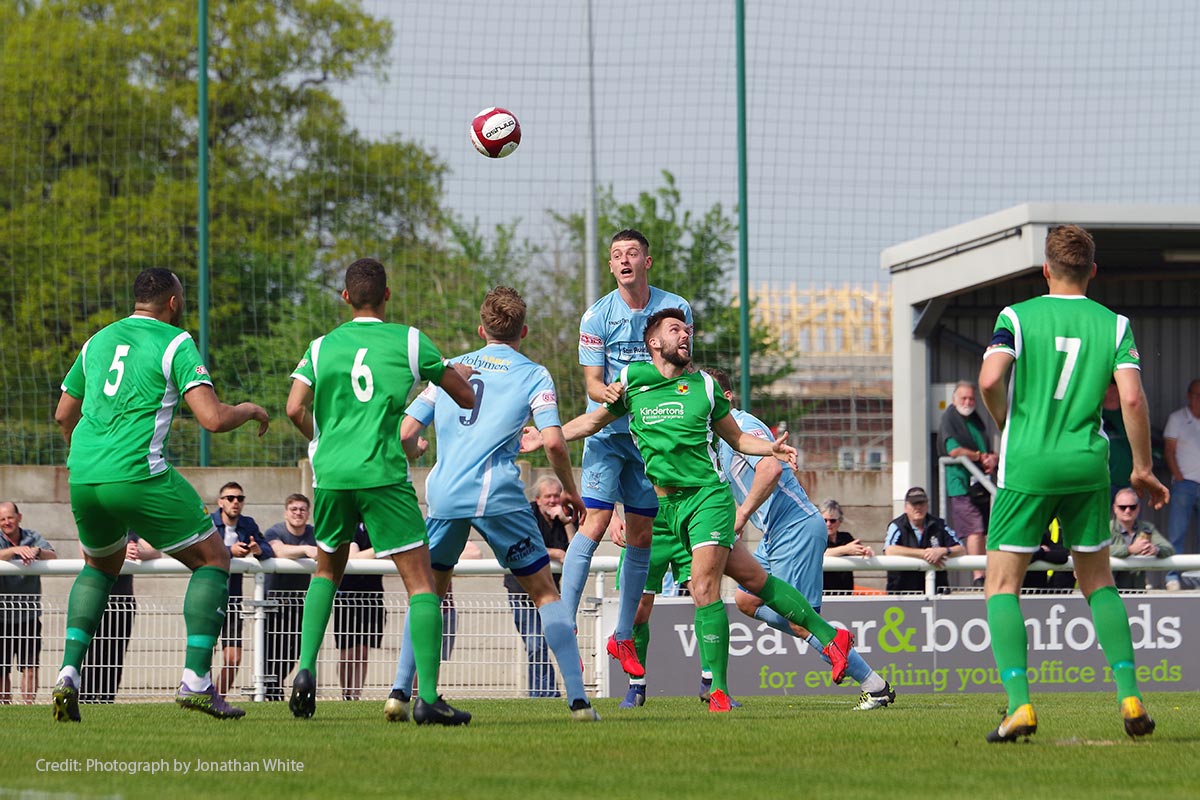 Stafford Rangers secured their NPL Premier Division status with an Easter Monday victory away to Nantwich Town. Needing a win to make certain, Rangers got the three points they needed thanks to a Jake Charles goal early in the second half.
Rangers were without the injured duo of Paul Bignot and Theo Bailey-Jones – the latter missing from the squad for the first time this season.

Nantwich Town had nothing to play for having already secured 4th place in the table and, with the Cheshire Senior Cup final due to take place two days later, they made 8 changes to the side that started in Saturday’s win over Lancaster City.

The opening 10 minutes were evenly balanced – the nearest either side coming saw Nantwich’s Nathan Brown float in a centre towards Danny Glover and Stafford skipper Luke Jones was forced to concede a corner. Stafford’s midfield and attack gave the Nantwich defence little time to settle and created a half chance when Louis Briscoe dispossessed Joe Davis but was unable to connect with Joe Cuff’s square ball from the following play. In the 19th minute, Cuff and Jack Sherratt combined to commit a needless foul on James Lawrie. The Dabbers’ captain floated in the free kick towards Callum Saunders who appeared to have done enough to open the scoring only for Adam Siviter to save well.

Stafford started to do more of the pressing and Dan Burns headed across the face of the home goal following Louis Briscoe’s well flighted free kick while Sherratt’s effort from around 20 yards out lacked conviction and floated wide. In between these two efforts, Charles did get the ball in the Nantwich net but was flagged offside and a fairly uninspiring 45 minutes ended goal-less. Nantwich were first to show after the break. In the first minute, Clayton McDonald tried to catch out Siviter with a quick free kick from the half way line then James Lawrie fired wide from around 15 yards out.

Stafford soon found their feet and Sherratt tried to put Charles through, but McDonald used his considerable size to block the Stafford man’s path, earning himself a caution. Toby Mullarkey fired wide for Nantwich after an exchange with Danny Glover before Stafford got their noses in front on 56 minutes. Briscoe did well on the right to get past Troy Bourne and got in a thumping shot that Lloyd Allinson pushed away. Cuff picked up possession on the left and burst past his man to get in a shot which was turned in at the back post by Charles. Burns was cautioned for bringing down Glover after getting caught in possession, but it was Stafford who were doing the pressing and Cuff put two efforts wide a couple of minutes apart. Glover tried a 30 yarder that Siviter was equal to and Rangers were able to celebrate their survival which would have been confirmed whatever their result after Mickleover’s defeat at home to Basford.