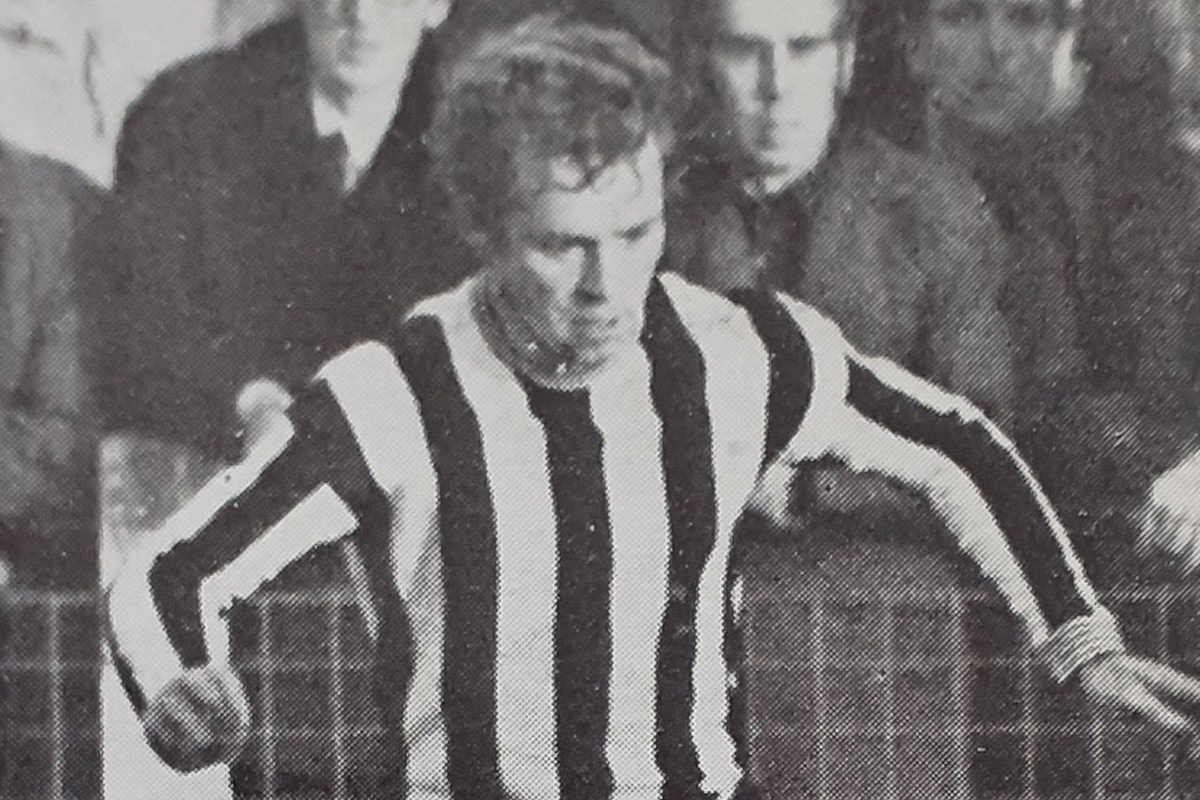 Everyone at Stafford Rangers was saddened to learn of the death of former player Gerry Jones on Tuesday 17 August.

Gerry played over 300 games for the club during the late 1960s / early 1970s and was still a regular among the crowd.

Born in Newcastle under Lyme on 30 December 1945, Gerry began his football career direct from school, signing as an apprentice professional with Stoke City. He signed a full time professional contract in June 1963. After making his debut in 1964/65, he played seven matches for Stoke over three seasons but failed to establish himself in Tony Waddington’s first team and was released in May 1967.

Although he only made seven first team appearances, the highlight was against a star studded Manchester United side which included Denis Law, George Best and Bobby Charlton. After his release from the Victoria Ground, Gerry decided to go part time and moved to Stafford Rangers. His signing was described as the final piece in the jigsaw – the emerging team being built by manager Colin Hutchinson – and he went on to form a devastating left wing partnership with George Latham.

In the Cinderella Story, Paul Butters wrote “Then Gerry Jones was signed from Stoke City and filled one of the remaining gaps with that touch of class that made all the difference…..He strengthened an already strong side immeasurably….”

Gerry’s debut came on 12 April 1968 at home to Winsford United but it wasn’t to be a dream debut as Rangers lost 1-3. The team was: Brian Quigley, George Machin, Bobby Meadows, Jim Sargeant, Peter Ford, Fred Donaldson, Cliff Johnson, Graham Bird, Brian Wilson, Gerry Jones, Ray Williams. Gerry went on to play more than 300 games for Rangers and scored 46 goals – including two against Runcorn in the Cheshire League Cup Final of 1967/68. He was a key figure in the 1971/72 treble winning squad – turning out 65 times in that season. Among his honours were winner’s medals in the FA Trophy, Northern Premier League, Cheshire League Cup and two in the Staffs Senior Cup.

Appearances became less frequent over the following two seasons and with growing business pressures, he left the club in 1974, along with fellow Wembley heroes Graham Chadwick and Joe Clayton.
Gerry joined fellow NPL side Macclesfield Town but his stay with the Silkmen was brief – he only appeared in the opening two games of the 1974/75 season before returning to Stafford where he played out the season in the reserves.

After dropping out of the game for a year, he was back at the club in 1976/77 as trainer / coach alongside manager Reg Berks then left the game for good.

Stafford Rangers thoughts are with Gerry’s family at this time and we will mark his passing and celebrate his life and love of the football club with a minute’s applause before the home game against Radcliffe on Saturday 21st August.