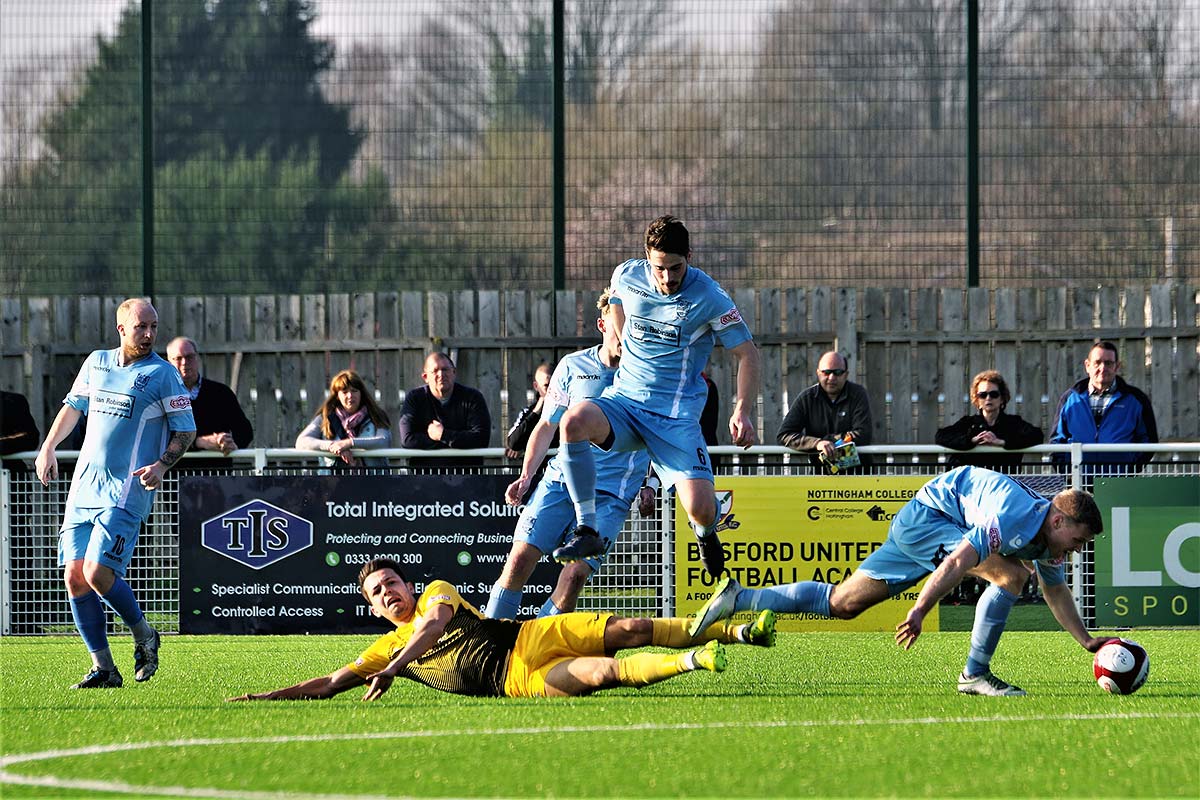 A late goal gave Stafford Rangers a deserved share of the spoils on the 3G surface of Basford United ending a run of three consecutive defeats on the artificial surface. It was Basford’s first home draw of the season. Rangers were unchanged from the side that beat Bamber Bridge a week earlier, apart from Andrai Jones replacing Louis Briscoe on the substitutes bench.

When the two sides met at the same venue in an FA Trophy tie three months ago, Rangers were blown away as Basford raced into a three-goal lead inside 20 minutes. The Notts side found a different looking Stafford side this time around and one which was asking some questions of the home defence although it was Basford who came closest to an opener in the first 20 minutes.

A long kick from home keeper Saul Deeley threatened to put Basford’s Shaun Harrad in but Stafford defender Dan Burns did well to hold him off and get the ball back to Adam Siviter. Siviter was in the action again when he failed to take Nathan Watson’s dipping cross, but he recovered in time to dive on to the loose ball.

But it was James Reid’s free kick on 19 minutes that came closest to a goal – the ball striking the Stafford wall before looping over. Rangers’ first serious effort came a couple of minutes later when a good ball down the line from Theo Bailey-Jones found Jake Charles who, in turn, spotted a run from Jack Sherratt but the midfielder’s shot went the wrong side of Deeney’s right hand post. Soon after, Sim Thandi curled one over after an exchange of passes with Charles then Joe Cuff went just wide following Thandi’s lay off.

A good move from the home side saw Fernando Bell-Toxtle put in Zak Goodson but he was denied by an important challenge from Burns. The deadlock was finally broken with a superb strike from Bailey-Jones on 33 minutes. Cuff found his man wide on the right after just winning the battle for a 50-50 ball and Bailey-Jones let fly with a shot across Deeley and inside the far post. Basford went close to an equaliser on the stroke of half time when Watson flicked Reid’s free kick on to Liam Bateman but Siviter saved well with his body.

Bailey-Jones missed a great chance to increase Stafford’s lead early in the second half when he blazed over from close range following Matt Hill’s cross. A minute later, Tom Thorley filed to shoot when the opportunity arose on the edge of the area. They were costly misses as Basford, boosted by sub Liam Hearn, levelled on 65 minutes when Matthew Thornhill’s ball found Jack Thomas and he created himself a yard of space to fire smartly past Siviter. Basford went in front three minutes later; Reid’s free kick was met by a glancing header from Shaun Harrad and Siviter’s best efforts were to no avail.  Stafford should have been awarded a penalty on 74 minutes when Thornhill handled inside the area, but referee Richie Watkins waved play on.
Basford controlled the final 15 minutes to repel almost everything that Stafford had to offer. Rangers should have levelled in the final minute of normal time when Ben Mills skewed wide when well-placed, but the visitor’s persistence paid off and they grabbed a share of the spoils in the first minute of added time when Deeney’s save to deny Bailey-Jones rebounded into the net off Basford defender Dominic Roma.